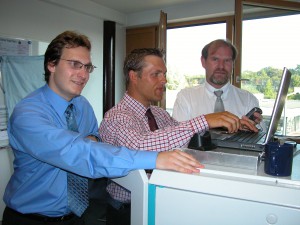 10 years Qosmotec – over the course of the next 10 weeks, we want to tell ten interesting stories about our company, our different fields of activity and our technological achievements.

How it all started

In January 2004 Dr. Dieter Kreuer, Mark Hakim and Axel Voigt founded Qosmotec. “We knew each other a while before Qosmotec: Dieter supervised my diploma thesis in 1998 and I did the same three years later for Axel, when he finished his studies”, remembers Mark Hakim. “All the three of us were convinced that it is possible to make end-to-end test automation equipment for wireless networks a commercial success. Up to that time, this kind of activity was – if enforced at all – still stuck in some self-made and prototype developments by the network operators.” 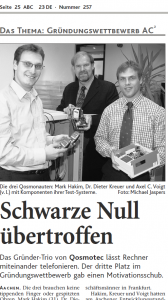 To be prepared as good as possible, the three founders participated in a business plan contest in Aachen, which was carried out for the first time that year. “Our ideas gained approval, and we ended up as one of three winners. By the way: Qosmotec was the only company of the rewarded ones that was actually founded,” lets Hakim know smiling.

Over the years, Qosmotec has established substantial reputation: Dr. Dieter Kreuer in his position as Qosmotec director was listed as one of the 500 most important people in the Rhineland region in 2012. 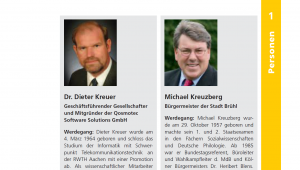 But even the best business concept would be worthless without engaged and convinced co-operation partners. Right after founding the company, we established sales partnerships with Delo Instruments in Italy, Artiza Networks in Japan and Teraquant Corporation in the US which all generated first business within a few months. Based on these experiences, Qosmotec maintains a network of local sales agents, who know and understand the customer needs, and who can help them in any kind of questions and problems. “It is very important for us to have these front-ends to most of our customers. The feedback of our sales partners has helped us a lot to improve our products over the time”, honors Mark Hakim the work of Qosmotec’s sales partners. Today, our most successful co-operation is with FSTC consulting from Vienna, who have taken over the responsibility for Austria, Germany, and several other European countries.

On the technological side, Qosmotec is not on its own. The most outstanding and closest co-operation with the electronic designer Manfred Kopp from Aachen persists already since 2004. “Manfred and his team have often helped us out with tiny and intelligent designed circuits that are custom made for our products”, says Mark Hakim.

The big locational advantage of Aachen is the proximity to RWTH Aachen University that is known world-wide for its excellent research capabilities. The faculties of electronical engineering and computer sciences contain various institutes and chairs that deal with mobile communication. The institute for theoretical information technology under the direction of Prof. Rudolf Mathar has been working together with Qosmotec in various research projects. One of their biggest contributions to Qosmotec products was their development on ray tracing algorithms that enables to predict signal propagation in urban areas and enable us to emulate radio conditions in the test lab taking into account building environments of real cities. Mark Hakim speaks about the newest joint activities: “We have just set up a new project about radio signal propagation in Car to Car communication with our research partner. This is a very challenging area with very different requirements compared to public mobile networks. We expect a high demand on test systems there in the near future. ” 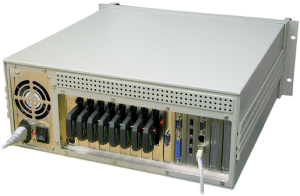 Qosmotec has a huge variety of customers with a broad range of application areas, and was involved in very interesting activities in the telecom world. In 2004, Qosmotec participated in testing the world wide first UMTS network that was established in Italy. One year later, we oversaw the roll-out of the first GSM-R network in Germany with our test systems. Whether it has been Toll Collection or Self-Organizing Networks – Qosmotec has dealt with all issues concerning wireless networks. Currently, we are working on supporting Car-to-Car and Car-to-Infrastructure communication with our test systems – quite a challenge, because it changes Qosmotec target market: “With this, we are more addressing the automotive industry than suppliers and operators of public networks.”

Some of our developments have meanwhile become out-of date again. Mark Hakim remembers: “We have been involved also in test systems for GSM-BOS, a special security standard that was never introduced. Instead, TETRA prevailed”. Other things were only of interest for a limited lifetime. For example our datacard control server – a system that was able to control up to 16 PCMCIA datacards in parallel which were soon replaced by USB sticks. Mark Hakim concludes: “These examples show how fast the telecom business moves. We have always been flexible enough to react on these quick changes. After ten years we are experienced enough to expect the unexpected and react adequately to challenges in front of us.”