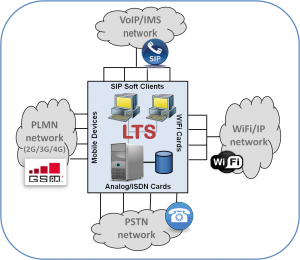 LTS Call Generator can generate voice and data calls via all kinds of wireless networks.

The Mobile Network Tester LTS is an automatic call generator, that establishes voice and data calls to and from actual mobile devices in the test system. Voice calls can be generated via the wireless PLMN network using actual mobile devices, via the PSTN network through analogue or ISDN lines or via Voice over IP. Wireless data sessions can be setup through the 3G or 4G network or over WiFi.

For voice calls, LTS allows to measure the voice quality as well as to recognize voice announcements. Data calls are established to any data source or data sink and data transmission on the uplink and downlink can be initiated via various network protocols.

The following sections list the various different options for call generation with LTS, which can arbitrarily be combined in one test scenario: 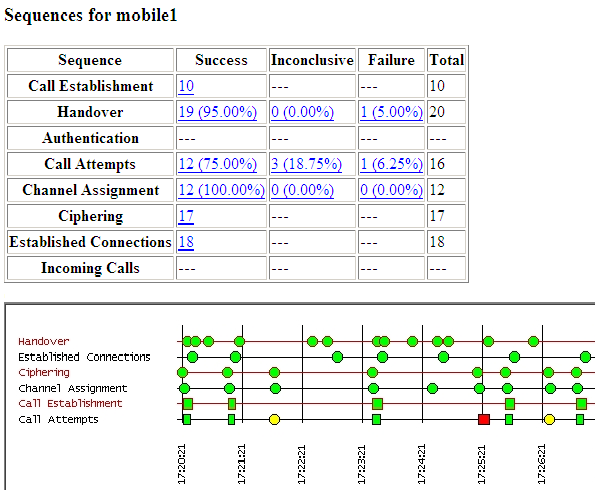 Detailed KPI report on a sequence of voice calls automatically set up via the LTS call generator.

LTS sets up CS voice calls between mobile devices in the test system and is able to control the originating and terminating side. In a mobile to mobile call, it measures the call setup time, the call duration and detects connection losses. If a call drop occurs, the release cause is revealed. The incoming calls can be checked for the transmitted number and the response time can be configured individually. While a call is connected, LTS can transmit voice samples in both directions to generate load on the voice path.

Voice services can be combined with supplementary services such as call forwarding, calling line identification/interrogation/suppression, call waiting, call joining and (where applicable) call barring. Test cases will be able to request a supplementary service and then verify it with a test call. 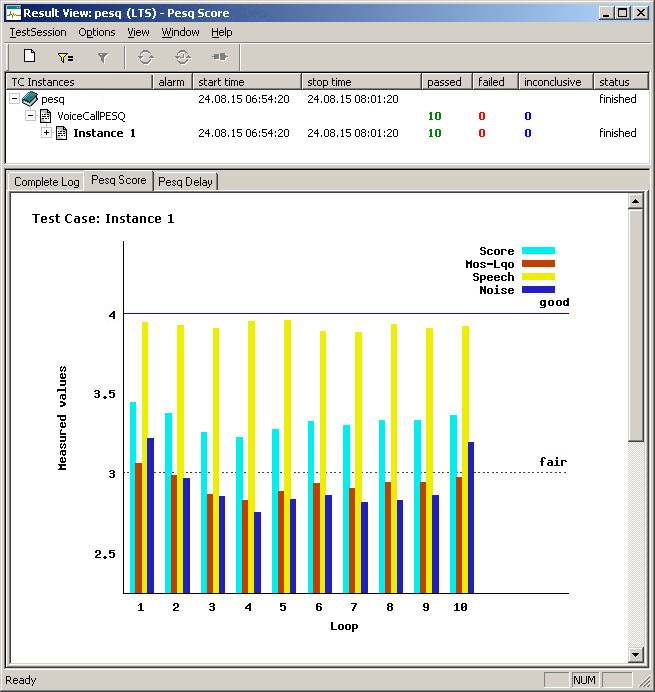 With the LTS Call Generator, quality of the voice channel can be automatically rated for all supported transmission technologies  according to standardized psychoacoustic models that mimic human listening perception. Voice samples are sent via the link, recorded at the receiving end, and compared with an undisturbed reference sample. The analysis reveals a mean opinion score (MOS) that rates the human perceived voice quality on a scale from 1 to 5, voice delay, amount of noise and other psychoacoustic parameters.

Support hotlines, automated ticket vending systems and voicemail systems are based on interactive voice response. To test such systems, LTS is capable to navigate through IVR menus and verify the location  in the menu tree. Voice announcements of the IVR system are recognized with very high reliability. User interactions are simulated by DTMF tones or playback or pre-recorded voice commands

LTS supervises circuit switched fallback (CSFB) from LTE to 3G or 2G as well as VoLTE call set up within 4G and single radio voice call continuity (SRVCC). LTS is always aware of the radio access technology currently in use and will detect any change promptly. For CS fallback, the time between dialing and changing to circuit switched radio technology is measured (CS-fallback time), as well as the time to switch back to 4G after the call is released (return-to-LTE time). Call setup time and call persistence is supervised in the same way as for circuit switched calls.

Using any kind of UE (smartphone, tablet, datastick or industrial terminal), LTS establishes PS connections to a data host and supports data transmission on both downlink and uplink via various network protocols (ICMP, UDP, FTP, HTTP, SNMP, POP3). Quality of Service requirements can be configured in the specification of the test case. During data transmission, LTS measures network performance in terms of data throughput, packet losses and delay/jitter.

It is recommended, that the data host is also under control of the LTS test system and connected directly to the Gi-Interface. This ensures that the performance of the mobile network is measured and the results are not distorted by additional delays or bottlenecks beyond the entry point. But – depending on the test purpose – alternative data host, potentially in the public network, can be employed.

The system supports easy-to-use mechanisms for high-volume call generation scenarios to generate traffic on the air interface and reach the capacities of a single base station. It gathers statistical information of the number of all totally generated calls over an observed time frame as well as the detailled call procedures and actions on the network.