When many cars are equipped with 802.11p communication technology, high traffic density will also cause significant load on the radio channel. From normal wireless communication systems it is a known problem, that many users can cause a complete breakdown of the network.

Car-to-X communication technology tries to protect itself against those kind of breakdown by a carrier sensing mechanism: Each communication device has to check first, if  the radio channel is busy. In that case, it waits for a random delay to avoid packet collision on the radio channel, which causes a loss of both collided packets.

But carrier sensing does not work in case of so called hidden nodes: If two potential senders cannot see each other, but their communication range is partly overlapping, they might still cause unwanted packet collisions on the radio channel.

To simulate this on a HiL test bench, Qosmotec has developed a 802.11p congestion emulator, that simulates the behavior of a high number of cars broadcasting on the radio channel. It runs on a Nordsys Wavebee and emulates the message broadcast of several independent senders realistically:

To ensure, that the carrier sensing mechanism of the Wavebee module does not avoid sending the messages constantly according to the defined algorithm, the congestion emulator is equipped with a hardware, that allows sending messages into a ad-hoc network, but prevents receiving messages from the network.

The congestion emulator can be used as a standalone simulation system for 802.11p load and can be inserted into the radio link between a transmitting and receiving device. 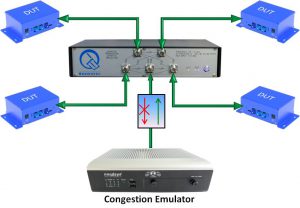 In combination with the QPER signal strength emulator, the congestion emulator can be integrated into an environment of a higher number of devices under test. This allows to simulate all validation scenarios standardized by ETSI for decentralized Congestion Control. The DCC scenarios are described in ETSI technical specification TS 102 687 and are characterized by 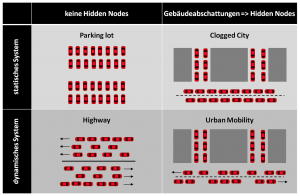