The challenge to test with smartphones

When Apollo 11 took off in July 1969 to conquer the Moon, a computer, much less powerful than an Android smartphone today, supported the flight into space. While using a smartphone is not exactly rocket science, their capabilities are still challenging enough for mobile networks. Therefore, network operators want and must employ phones that they recommend to their subscribers in their end-to-end test process. This allows them to test their complete portfolio and ensure all services they offer run flawlessly in their live networks.

However, integrating UEs into an automatic test system may turn out to be a pitfall for engineers. Especially, as smartphones are not designed for automated control and therefore, most features cannot be controlled over conventional interfaces. “Some features can only be accessed via the OS. This includes very basic features, for example the flight mode, which is important to detach UEs from network. Still all these functions have to be tested in end-to-end tests and therefore must be executed in LTS”, says Qosmotec’s managing director Dr. Dieter Kreuer.

However, with smartphones becoming more and more common a solution had to be found. Qosmotec’s development team concluded that this provided an opportunity to tackle two problems at once:

With Qosdroid, all vendors and all models based on Android operating system are supported by LTS

1. Finding a sustainable solution to integrate smartphones into LTS to ensure comprehensive end-to-end tests for all phone models on the market.

They came up with a Test Automation App to control smartphones using an Android OS, Qosdroid. “We were getting nowhere with AT interfaces. So we decided to take advantage of the fact that a smartphone is a small computer and use the OS to get access to all features,” says Dr. Kreuer about the strategy behind Qosdroid.

Tests run directly on the smartphone

This also simplified the LTS system architecture. While for controlling phones via AT-commands a separated control computer (the so called Mobile Control Server MCS) is a mandatory system component, the test automation app can be installed on Android smartphones from all vendors and allows users to run LTS test cases directly on the smartphone. “Once the app is installed it can execute LTS test cases directly on the phone via the Android OS”, explains Dr. Kreuer. 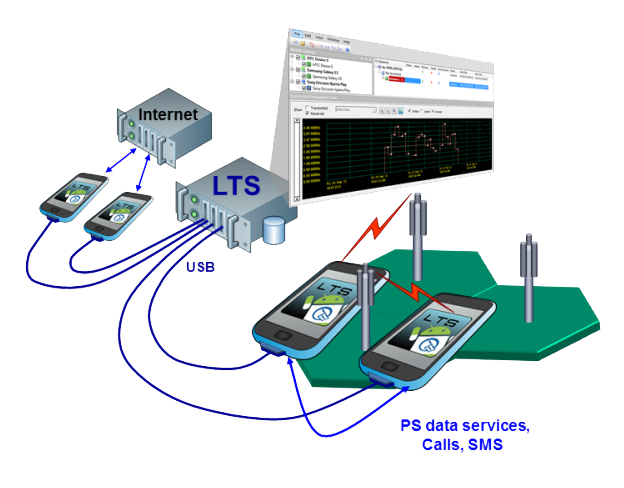 “This means we gain access to all features from a user perspective. A tester can design and execute test cases for live networks in which he employs features like apps or video communication, which are not accessible on smartphones via conventional interfaces. So network operators can ensure their complete portfolio runs in their network.”

While this solved the issue how to integrate smartphones into LTS, Dr. Kreuer highlights the independence from telephone hardware gained through Qosdroid: “It makes us and our customers much more independent from telephone hardware. It is very much plug and play. Qosdroid basically just needs an Android OS regardless of model and manufacturer. One no longer needs to check whether a new phone-model is compatible with the test automation system. We avoid a potential pitfall: integrating new hardware in a test automation system. Our customers can run end-to-end tests with new models once they are available”.

Last not least Qosdroid enables testers to take advantage of each attached UE’s processing capacity. This means the number of test UEs in LTS can be scaled up without additional backbone processing power. “Users can attach as many smartphones as they like and extend their existing test systems without any alteration of their set-ups”, summarizes Dr. Kreuer.