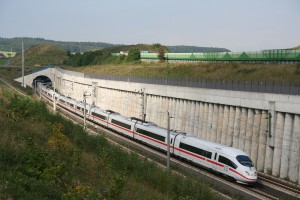 The Westerwald low mountain range on right banks of the river Rhine is not the obvious place to build a high-speed railway line. However, over steep climbs, through long tunnels, cutting through hills, and over viaducts arching across small valleys run the trains of the Cologne-Frankfurt high-speed railway with speeds up to 300 km/h. What is a master-piece of civil engineering is a nightmare for network operators. Signal strength is impeded by all sorts of disturbances and sufficient coverage hard to achieve, but still vital for some.

GSM-R is a very special wireless technology to control high speed trains and ensure communication between railway staff. The operator has to ensure that there is no communication loss along the entire line, because the communication is security relevant and a disconnected call may have fatal consequences.

Still, it was on the above described line through the Westerwald mountains where the operator of the German GSM-R network noted that the connection of a Voice Group Call was always interrupted in a certain area.  To detect what caused the interruption proved to be difficult. Test drives were nearly impossible, as test trains are only allowed to drive with very low speed and the whole track has to be closed for them. The solution to this problem was Qosmotec’s virtual drive test concept.

“Signal strength emulation is more than ramping attenuators up and down”

Qosmotec was in 2004 the first company to offer network operators a solution that enabled them to emulate drive tests in their test lab and achieve complete reproducibility of radio conditions. For this, we have helped ourselves with a technique that was anything else but new: The use of digital step attenuators to control the signal strengths received from several base stations. We enhanced it with a control software that is able to model real life like conditions and to calculate the correct settings, so that tests in the lab really reflect what subscribers experience in the field.

“Signal strength emulation is a very powerful method for reproducing radio conditions. The typical misconception is that it is only about ramping up one attenuator while ramping down another. It is much more than that”, explains Qosmotec’s managing director Mark Hakim. By means of controlling attenuators based on physical models, it is possible to simulate the most impacting radio conditions like signal degradation, shadowing, and even fast fading. Also 3D antenna pattern can be perfectly modeled in the lab – without making any change in the radio part. German news channel N24 took note of Qosmotec’s virtual drive test approach in September 2013.

This virtual drive test concept helped to reconstruct the GSM-R network operator’s problem. It was possible to extract the conditions, under which the call disruption occurred, from radio measurements taken in the problem area, and to replay the whole scenario on the attenuator hardware at the DB test center. With this reconstruction the reason could be found. A cell change after a hill, where a frequency had been reused, was not successful – a result that became only obvious in execution, not in network planning. 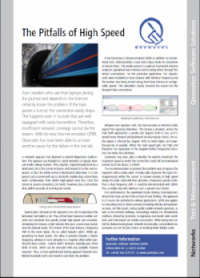 Another example was a tunnel scenario that was re-created with a large European network operator in their test lab. In this case, all standardized channel emulation scenarios failed to reproduce a situation where data connections got lost in high speed trains, while they were stable in normal trains. But the situation described by the customer was almost trivial to re-create with the virtual drive test approach. We detected exactly under which radio conditions the problem occurred and how it could be solved. A detailed description of this use case has been published in the magazine “Funkschau” in 2010.

Prediction of signal propagation in cities 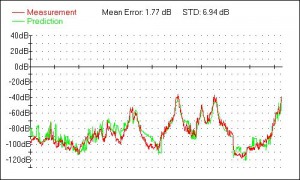 Together with the institute of theoretical information technology at Aachen University, Qosmotec also developed a mechanism to emulate drive tests through real cities. “Our propagation algorithms take into account radio wave reflections, deflection and diffractions on cities and can calculate signal strength and multipath effects in any location in a city”, explains Dr. Michael Reyer the research activities that contribute to our QPER feature for predicted drive tests. With these calculations, emulations can be done, based on building data of any city. Comparisons between a real drive test executed in the city of Munich and a virtual drive test show an impressive compliance of the completely theoretical approach with reality. Currently, Qosmotec runs a new project to adapt those algorithms for Car-to-Car and Car-to-Infrastructure communication. This joint research activity is funded by the German ministry for economics BMWi.

Over the years, the Qosmotec virtual drive test approach has become popular with mobile network operators – but infrastructure vendors have adopted the idea as well. Mark Hakim explains the success of Qosmotec’s methodology: “It is so simple to use and goes far beyond standard conformance test methodologies. With a few mouse clicks, it offers a high versatility in creating test scenarios that have already revealed a lot of problems which would have remained undetected otherwise”. Signal strength simulation is still the most important simulated propagation effect, but it is not restricted to that. With LTE and the MIMO technology coming up, Qosmotec has extended the approach to simulate phase differences of multiple antennas on sender and receiver side. Currently, we are developing a solution to emulate even multipath fading. “This will be an interesting solution, especially for wireless technologies restricted to short-distance communication like WiFi or Car-to-X communication technology”, says Mark Hakim. First results on this are expected for the first quarter of 2015. “We plan to introduce our solution at the Mobile World Congress in March 2015 in Barcelona”.