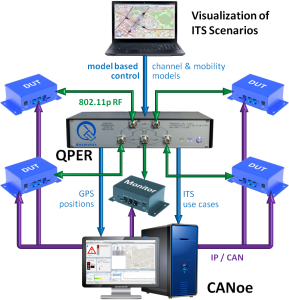 The QPER-C2X adaptation, that emulates signal strength between radio devices for Car-to-X communication in the lab, can be combined with the test automation software CANoe from Vector Informatik to enable a fully automated lab test under realistic radio conditions. This combination can be regarded as full test bench setups for Car-to-X test laboratories.

CANoe software awakens traffic situations created with QPER-C2X to life in the test lab. It ensures that the ITS radio devices – each of them protected from external disturbances in a shielding box – communicate with each other as they would do on roads. CANoe provides the same information and data, that would also be available in the car and that are necessary for sending Car-to-X specific messages. These are

Watch a video which demonstrates application scenarios on our YouTube-Channel.

Examples for communication between vehicles are

Decentralized Environmental Notification – ITS stations interact with each other by broadcasting safety relevant information to warn drivers about any kind of hazardous situations on the road. The Decentralized Environmental Notification Messages (DENM) contain information about the exact position and the road hazard, e.g., a closed road lane because of road works or a broken down vehicle behind a curve.

CANoe supervises which messages are sent and received by ITS stations. In combination with the field strength emulator QPER, tests get a comprehensive overview about the complete communication flow in a traffic situation, i.e., which messages are sent and received when, at which position, and under which radio channel conditions. Having this information, engineers can assess, to what extent the cooperative communication among the cars would have really brought a benefit for the driver or if he would have received significant information too late to react on it.

Thus, a laboratory test bench consisting of QPER-C2X and CANoe allows testing interaction among ITS stations from different vendors, but also among various car manufacturers or models under real-life field conditions.